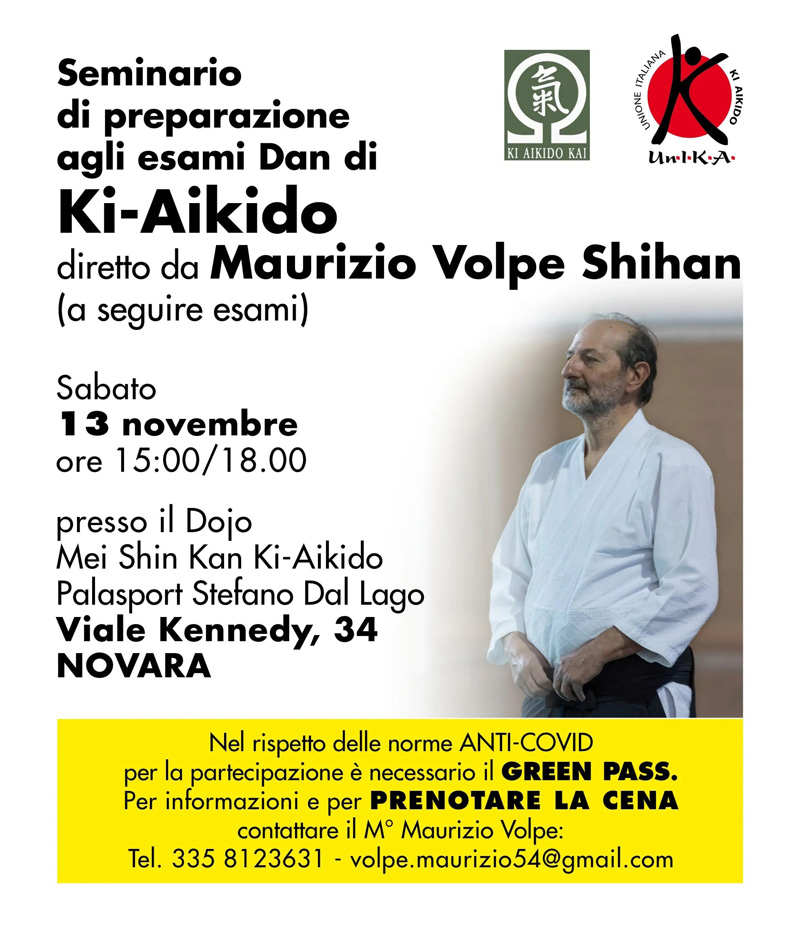 Seminar with exam for the 4th Dan

For the 13.11.2021 the Ki Aikido Kai and the UniKA had invited to a seminar with Maurizio Volpe. Almost thirty participants from northern Italy and also Maria Grazia and Bernhard from Switzerland met in the dojo MEISHINKAN (明心館) in Novara.
Due to Covid, all participants were recorded by name, their body temperature was measured and noted, and the Green Pass was checked for validity. Throughout the building, in the changing rooms and later on the mat, a mask had to be worn constantly. All clothes were stowed in their own sports bags, they were not allowed to hang around openly in the changing room. The slippers with which one goes to the dojo were packed there in plastic bags and stowed on a shelf.
Only at Kenkotaiso the mask was allowed to be loosened a bit. The participants in the Dan exam later could take off their masks. However, the environmental conditions in the training space were favourable. The room of the dojo is very high and a large window was constantly open. This ensured sufficient fresh air and recirculating air and effectively reduced the concentration of any pathogens present.

Maurizio started with Kenkotaiso and explained some of the movements with the well-known Ki test. In addition, he found volunteers who were happy to help demonstrate the possible mistakes. After that, he worked through a series of Ki tests, as they occur in the exams from JOKYU to OKUDEN.
This was followed by Tsuzukiwaza 11 (Katatedori irimi) from the program of the first Dan. Here, the techniques are carried out partly from the static and partly from the movement. Sometimes the difference between the techniques is not very clear. In particular, the differences between the first technique (irimi) and the third technique (uchiwanage) is interesting and was explained in detail by Maurizio.

Towards the end of the training, the exam for the fourth Dan for Francesco was on the program. This exam should have taken place at the beginning of 2020, but then had to be cancelled due to Covid. Since Yoshigasaki Sensei and Gianni Gioconto are no longer with us, Maurizio took over role of the examinator.
Corrado, Matteo and Samuele acted as Uke. Francesco showed in his usual sovereign and precise way all techniques including the Randori and was confirmed at the end by the applause of all Aikidoka on the tatami. 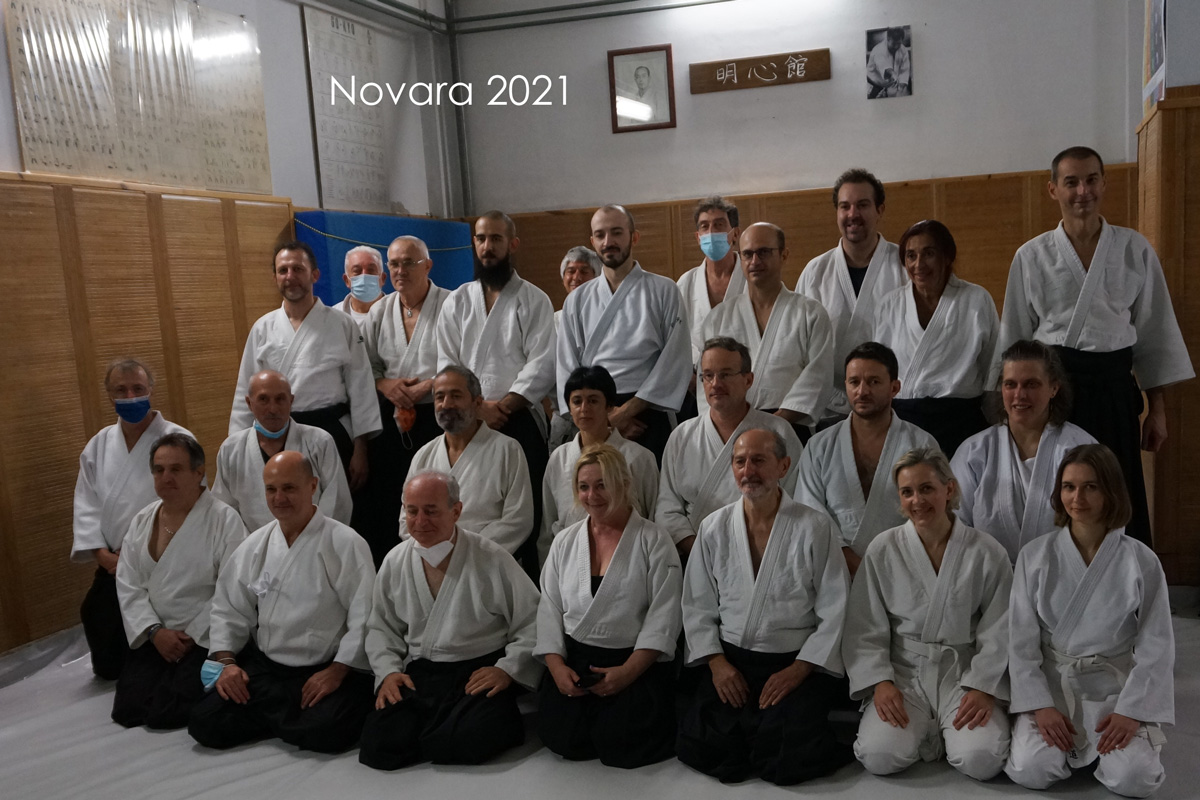 Some participants are still wearing a mask. 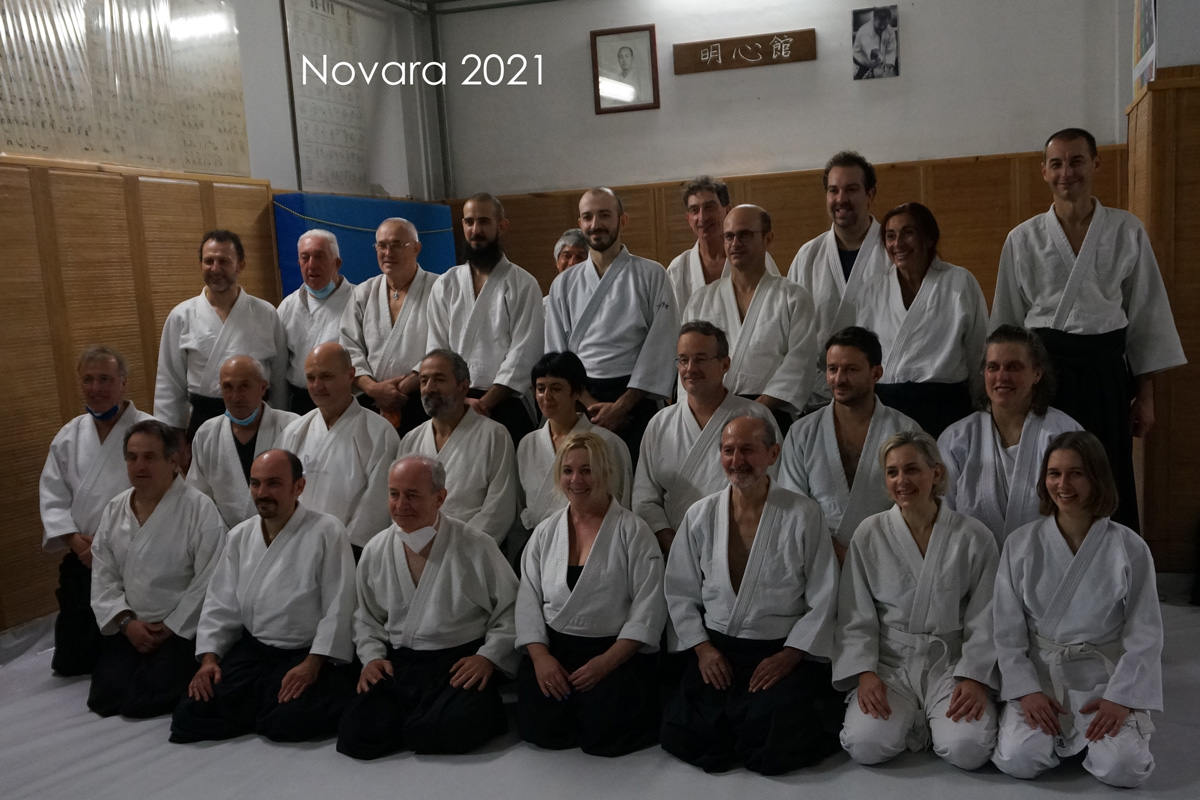 After the hint that the mask may be taken off briefly, the faces are now easier to recognize. In addition, the person who previously photographed is now also in the photo.

A large part of the participants went out for supper together. The participants from Switzerland immediately set off on the return journey, which ran quite well and without problems and delays, despite darkness, fog in some places and continuous rain.
The next Italian seminar will take place on 20.11.2021 with Francesco and Domenico at Turin, while in Switzerland a seminar will take place from 20.11. to 21.11.2021 at Lucerne.

MEI SHIN KAN (明心館) means "MEI SHIN Practice Hall". The term MEISHIN does not appear in Japanese dictionaries. It is obviously derived from the Chinese work Mingxin baojian (明心宝鉴). This is a collection of aphorisms from Confucianism, Buddhism and Taoism. According to Wikipedia, the collection was compiled around 1393. It was then also translated into the neighboring East Asian languages. A Dominican in the Philippines translated it into Spanish around 1590.
The Kanji 明 (MEI) means dawn, brightness and in Buddhist vocabulary "enlightened wisdom".
We know the Kanji 心 (SHIN) well, it is "heart" in the basic meaning, but is often translated as "spirit" or "mind".
The meaning of MEISHIN can therefore range from the "light-filled heart" to the "enlightened mind/spirit".