From 5.11. to 7.11.2021 Michal Hájek from AIKIDO LIBUŠ in the Prague suburbs had once again invited to the autumn seminar with Bernhard Boll. The participants came from Prague, Nuremberg, Vienna, Lucerne and Balerna. Due to Covid, the seminar was cancelled in 2020. So it was a pleasure for everyone to be able to meet again on the tatami.

the program started with Kenkotaiso, as there were three Ki exams pending. The examinees performed the Kenkotaiso individually and the whole group followed. There were only small things to improve. This was followed by all Ki tests with various exercises and explanatary approaches.
In order have a calm start of the seminar, Bernhard then presented a number of selected katame techniques (ikkyo-nikyo-sankyo) practiced for different attacks. Attention should be paid to the correct closure on the ground. These techniques are generally associated with less sweeping movements, which means that they need to be performed really precisely. So they require intensive practice. Especially for the "levers" nikyo and sankyo, the right connection to Uke must be created so that he/she can be guided without applying pain but in a convincing way.

Michal first led the one-hour MISOGI, which takes place regularly in his dojo at the beginning of the month and is open to all styles. The hall was then well ventilated and the traditional mat breakfast followed.
Bernhard continued then the lessons. First it was about falling and rolling, forward and backward. There were various exercises with and without a partner and many techniques in which Uke had to fall. Especially the large forms of falling gave a lot of fun and the participants sweated well.
After a short break we continued with the first four techniques from Tsuzukiwaza 20 (Jonage) and then with Tsuzukiwaza 8 (Yokomenuchi). The participants then demonstrated the Tsuzukiwaza in pairs.
For lunch we walked as 10 minutes to the restaurant Božská Komedie (Divine Comedy), Libušská 325. The food was excellent as expected.
Although the lunch break was well sized to recover from morning training and lunch, there were no fall techniques in afternoon training. First, Jo1 and Jo2 were repeated in the Hitoriwaza forms. Then the forms, as shown in the exam for the third Dan, were studied in detail. So, Bokken against Jo1 and Bokken against Jo2. The central questions were what is the task of the Bokken in these forms and what exactly should be demonstrated. As a change to the older form of Bokken vs. Jo2, Uke can now grasp the Jo with one hand at No. 6 and No. 10 and is then led to the other side. This corresponds to the form practiced in Jo2 against Bokken in the exam for the second Dan.
In the last half hour the Ki exams took place. Mikulaŝ and Jana from Prague passed SHODEN, Ryan from Vienna passed JODEN. All examinees had a very good level and can now concentrate on the preparations for the next Dangrade.
In the evening we went in the city center to the restaurant Na Květnici, Prague 4-Nusle. There was good beer and hearty food as well as baskets of French fries. The restaurant has a large beer garden, so it is especially worthwhile in the warmer seasons.

Michal first repeated all Bokken exercises as required in the 2nd Kyu and 1st Kyu exams. This was followed by additional exercises Bokken against Bokken. Bernhard then had No. 13 from Bokken1 Hitoriwaza, No. 16 from Jo2 Kumiwaza and Yokobarai Kokyunage from Jodori (Tsuzukiwaza 24) studied.
This was followed by the entire Tsuzukiwaza 30, Shinken, both in the current Kumitachi form and in the historical Hitoriwaza form. The latter is particularly suitable for studying the individual techniques. The Kumitachi form is a great challenge for beginners, as the forms are similar and you have to concentrate very well. One aspect of Shinken is the correct timing, which only works if there is a good mental connection (with Ki) between the training partners.
A quarter of an hour before the end of the seminar, Michal had to leave the mat. He brought the excellent soup, which his wife had prepared for us, to the mat picnic in the dojo.
We thank Michal, his wife and the aikidoka of his dojo for the always friendly welcome and Jana for the excellent chocolate cake she prepared and offered to everyone on Sunday, we thank Christian from Nuremberg for offering the Champagne that gladly accompanied the cake ... !
We look forward to meeting again in 2022 in Prague for a new autumn seminar! 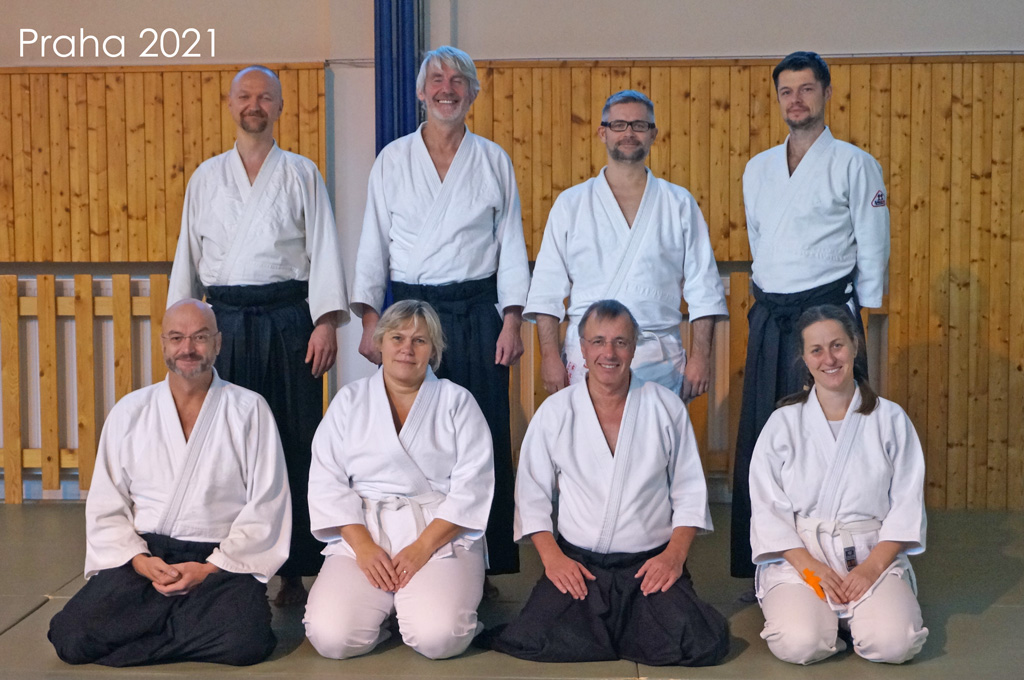 The participants from Saturday afternoon. 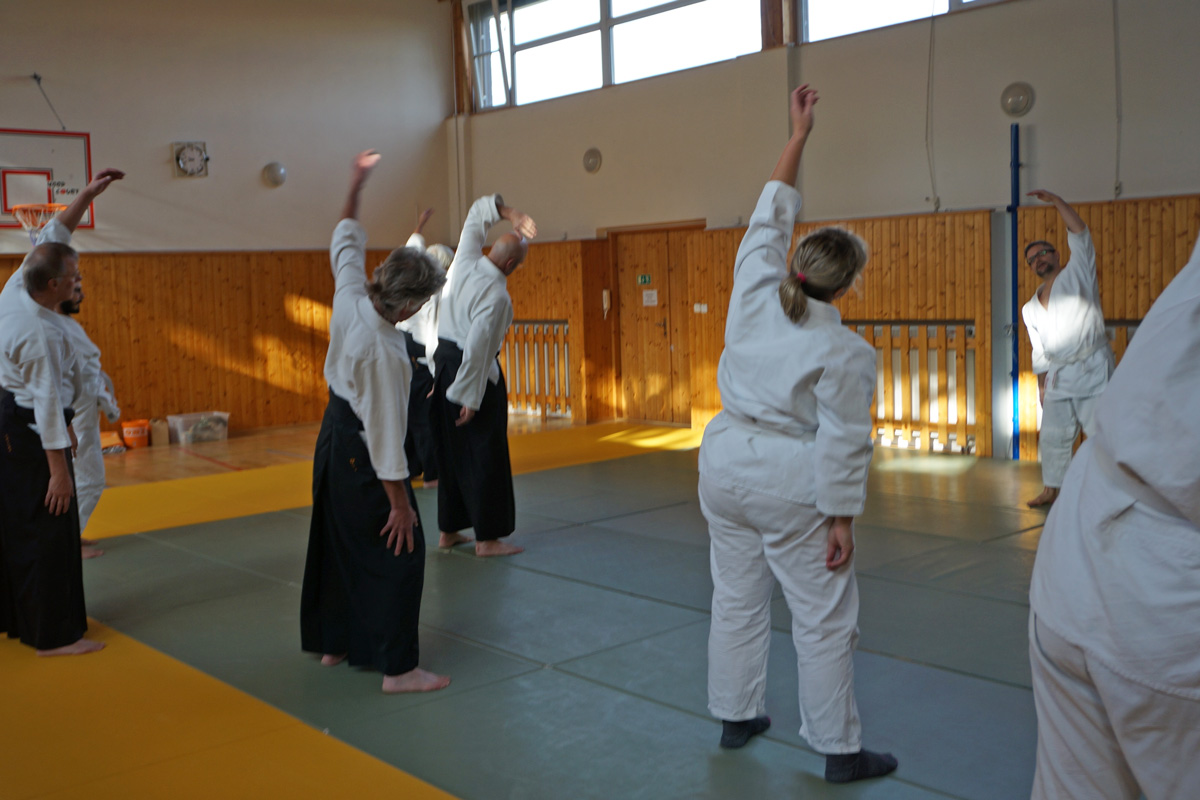 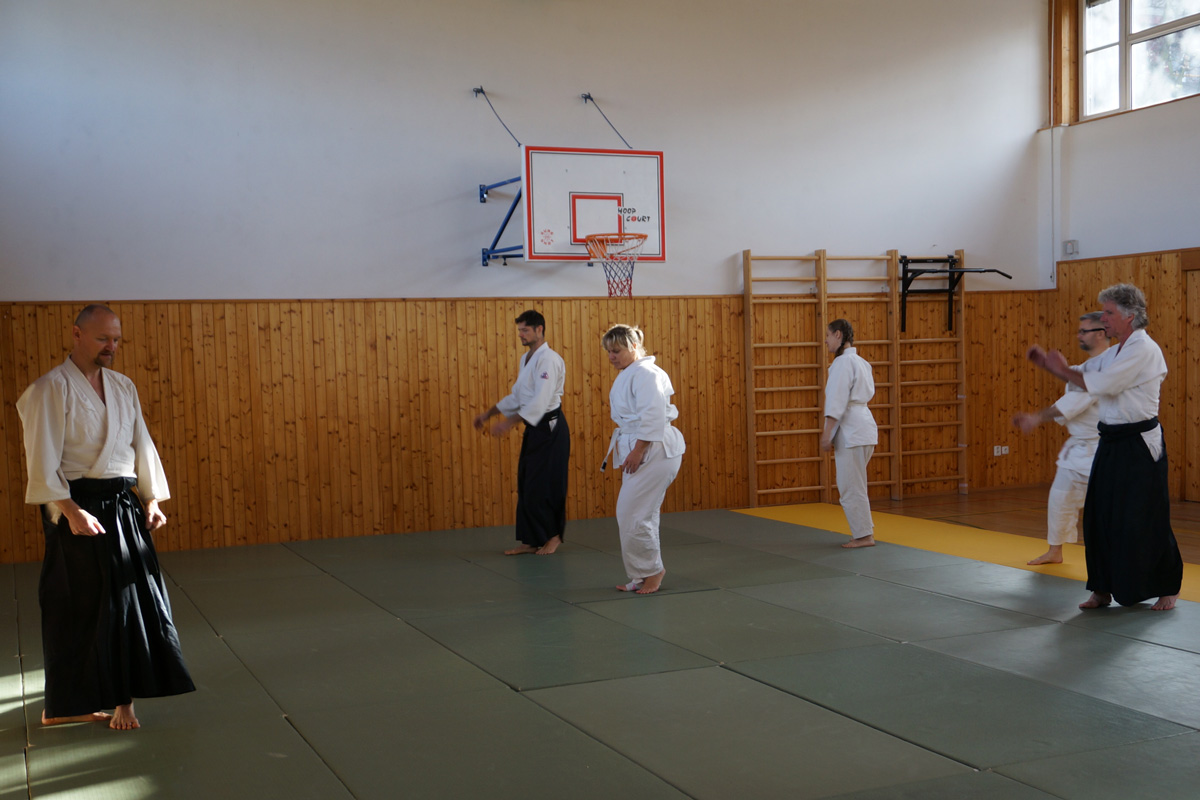 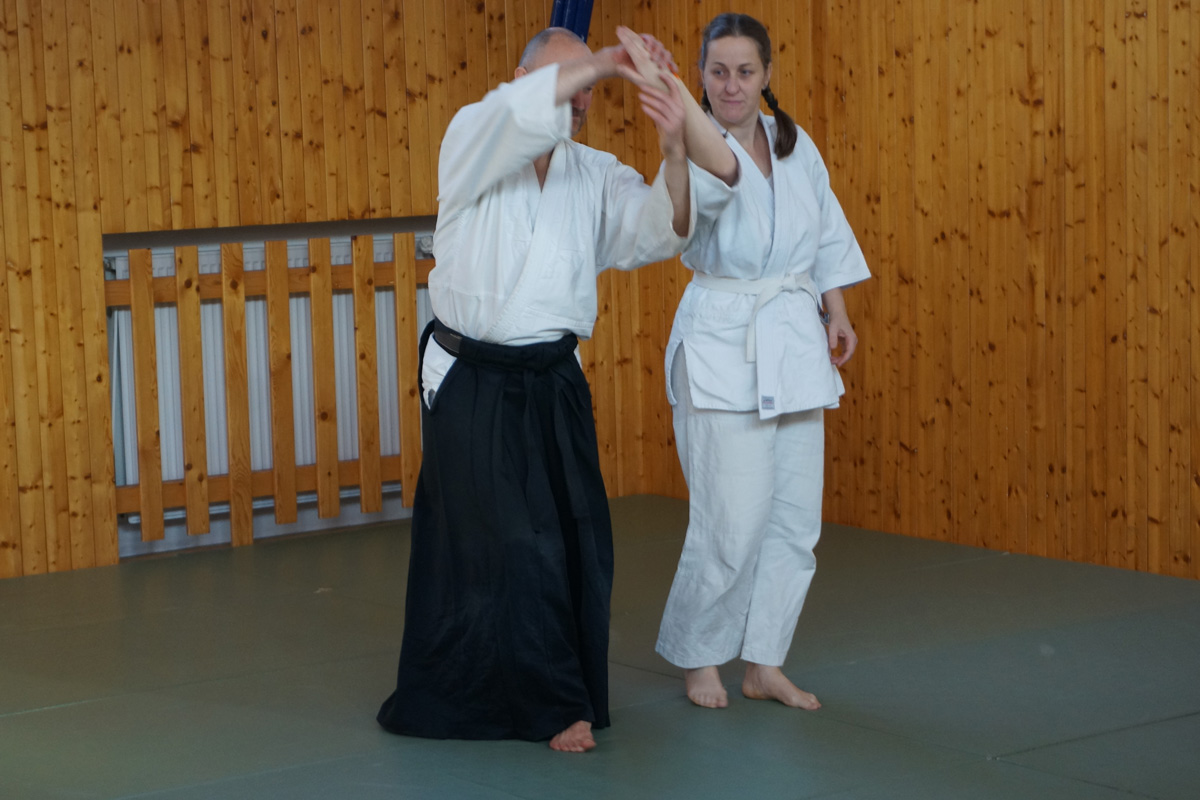 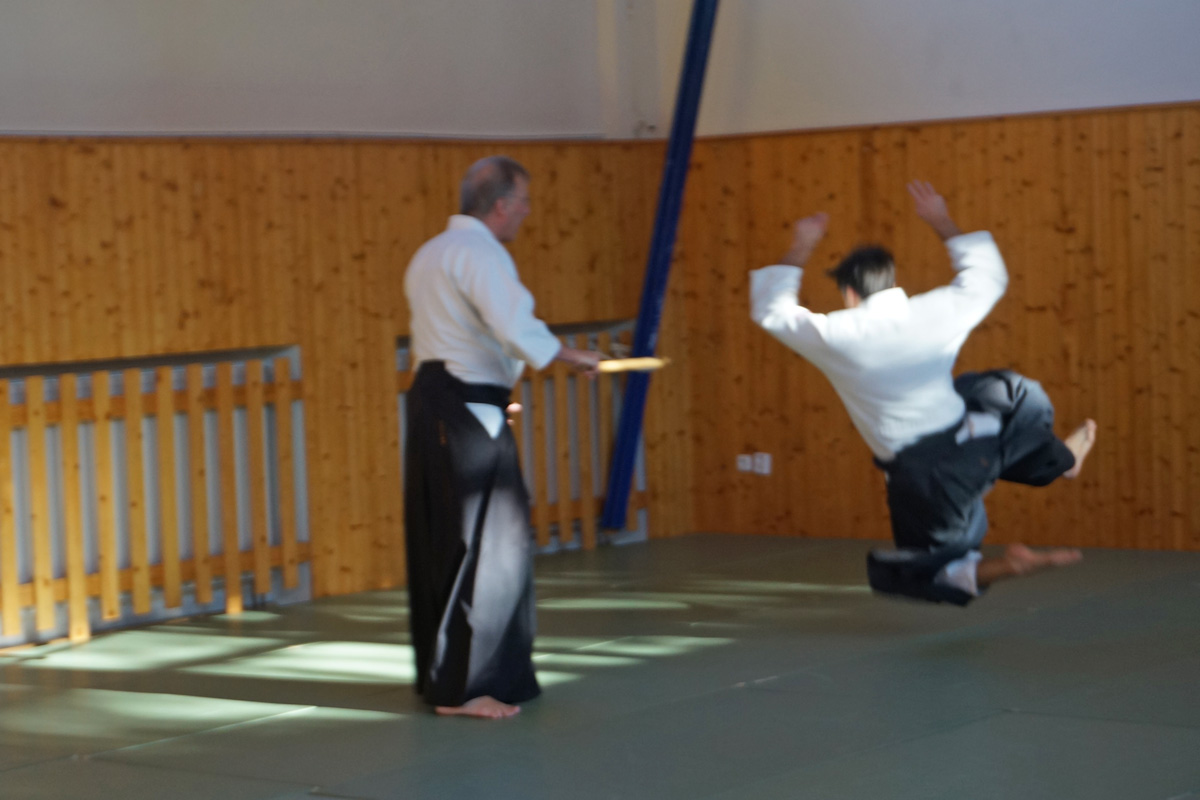 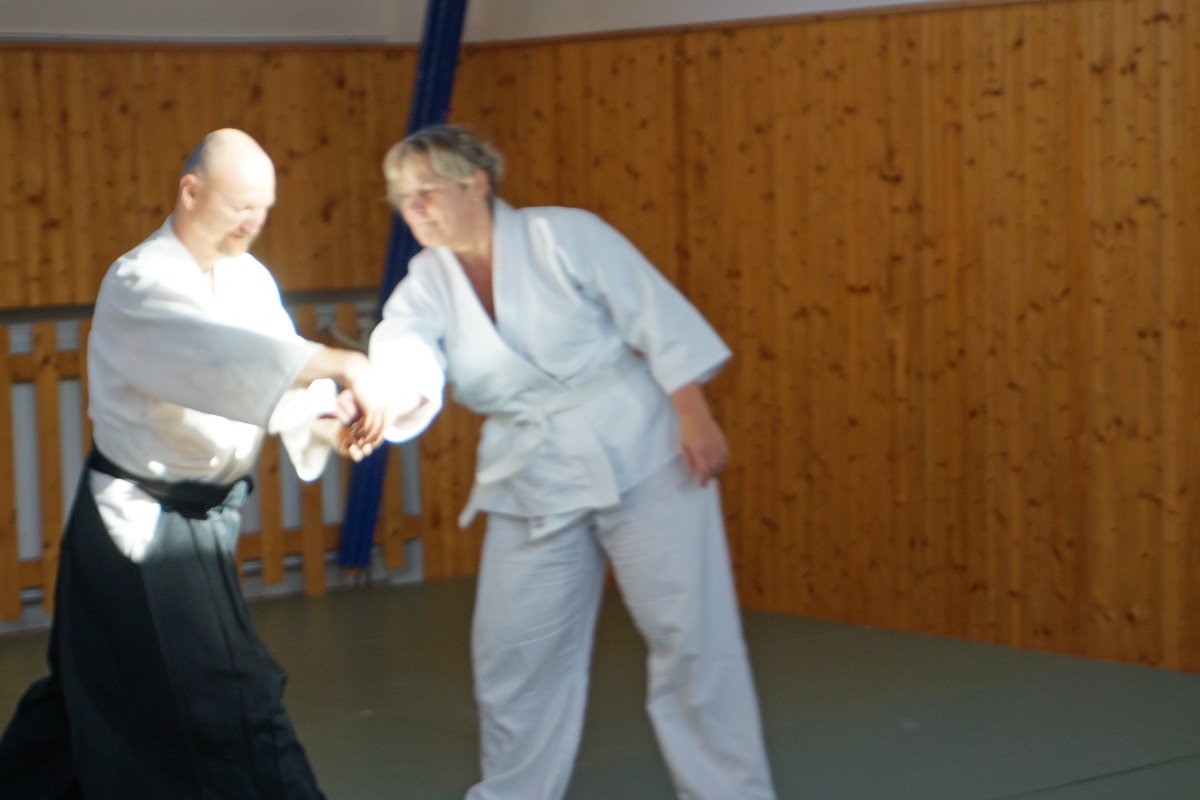 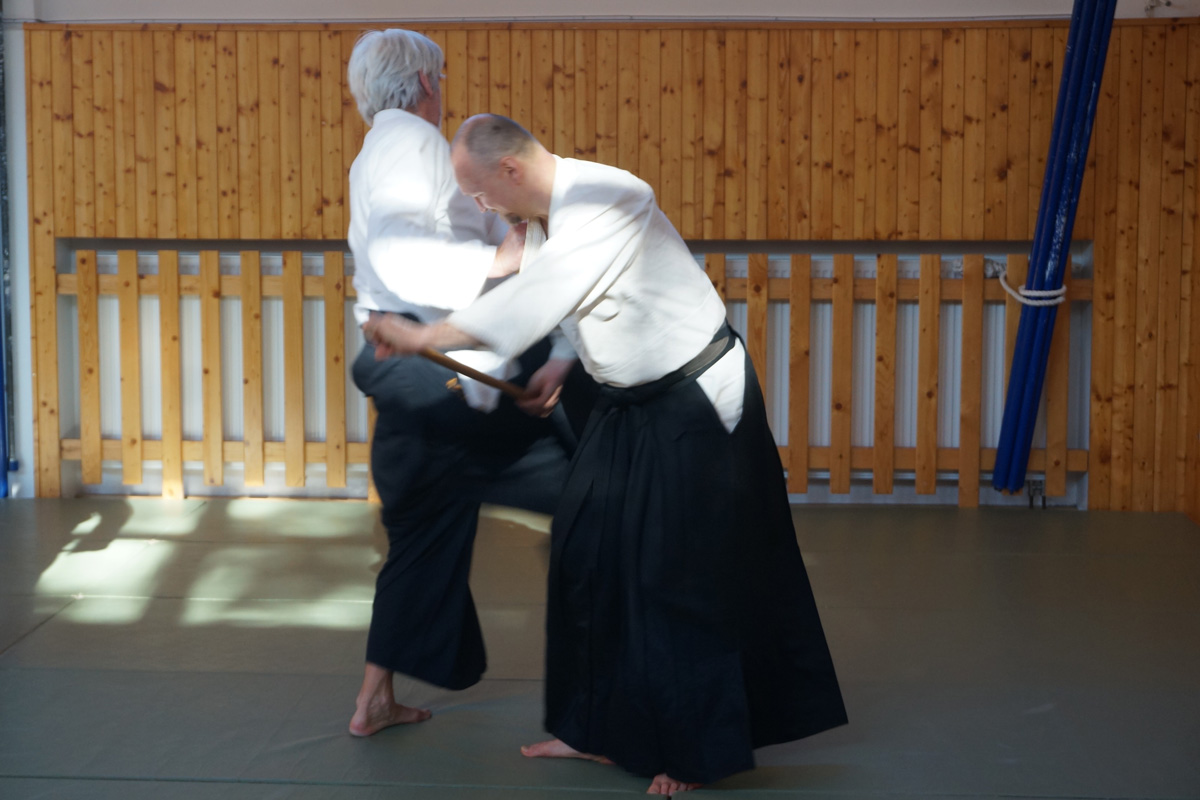 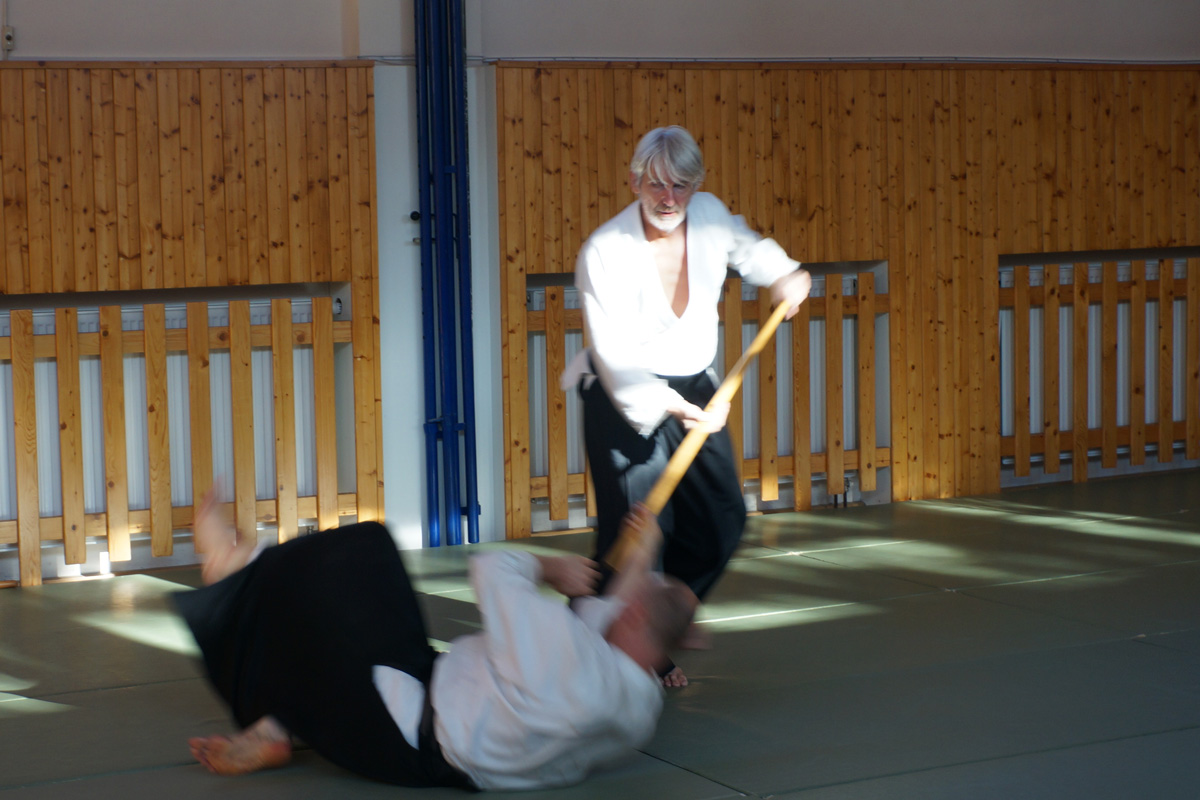 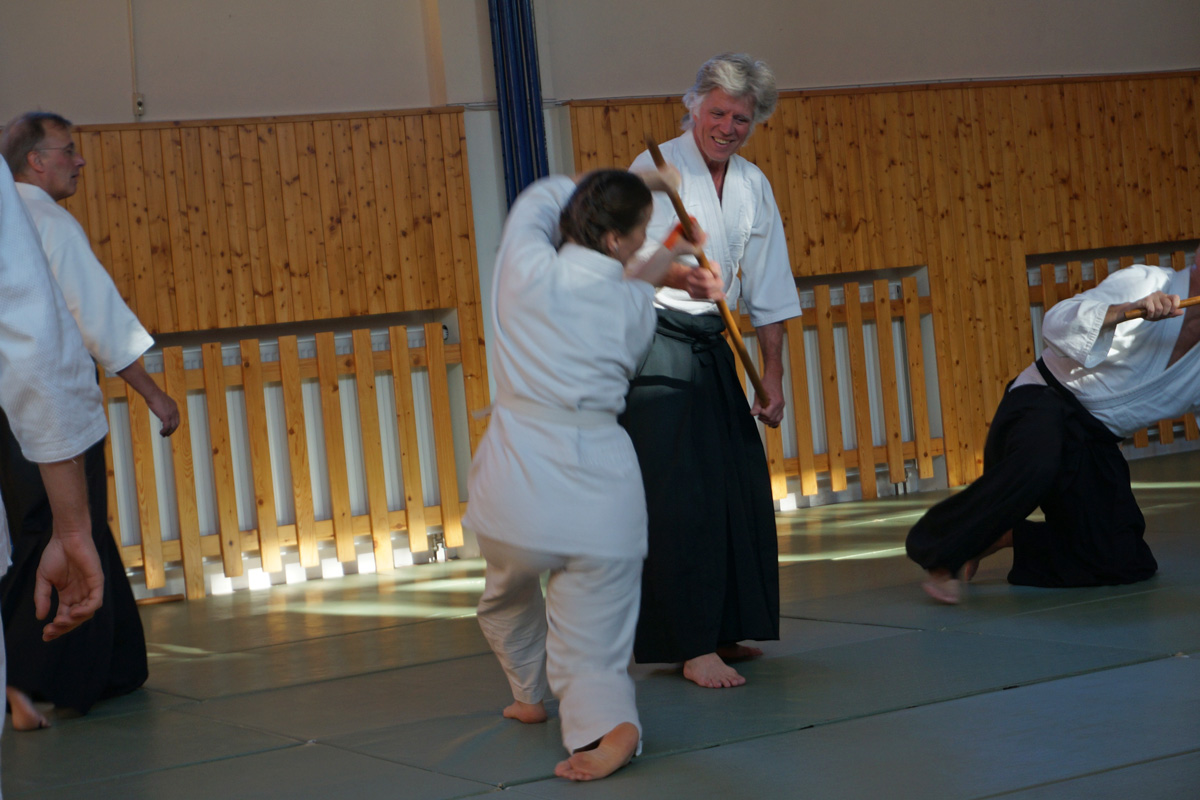 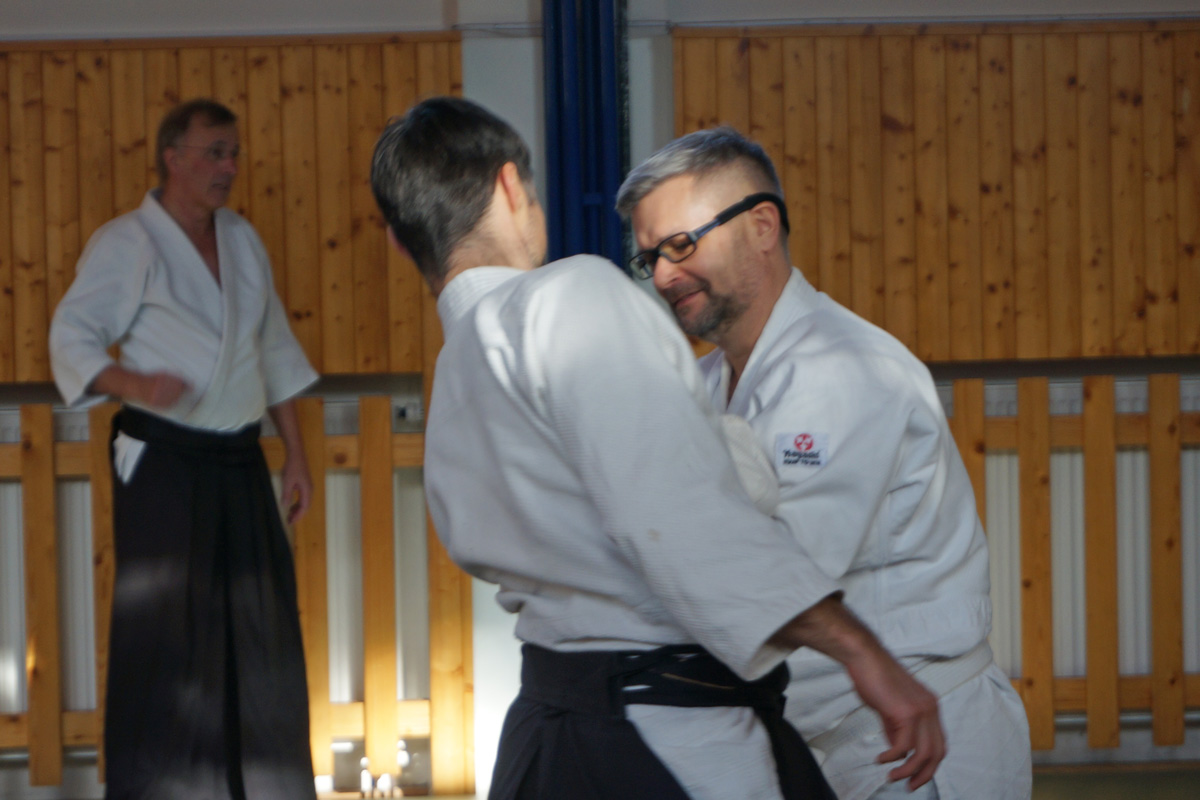 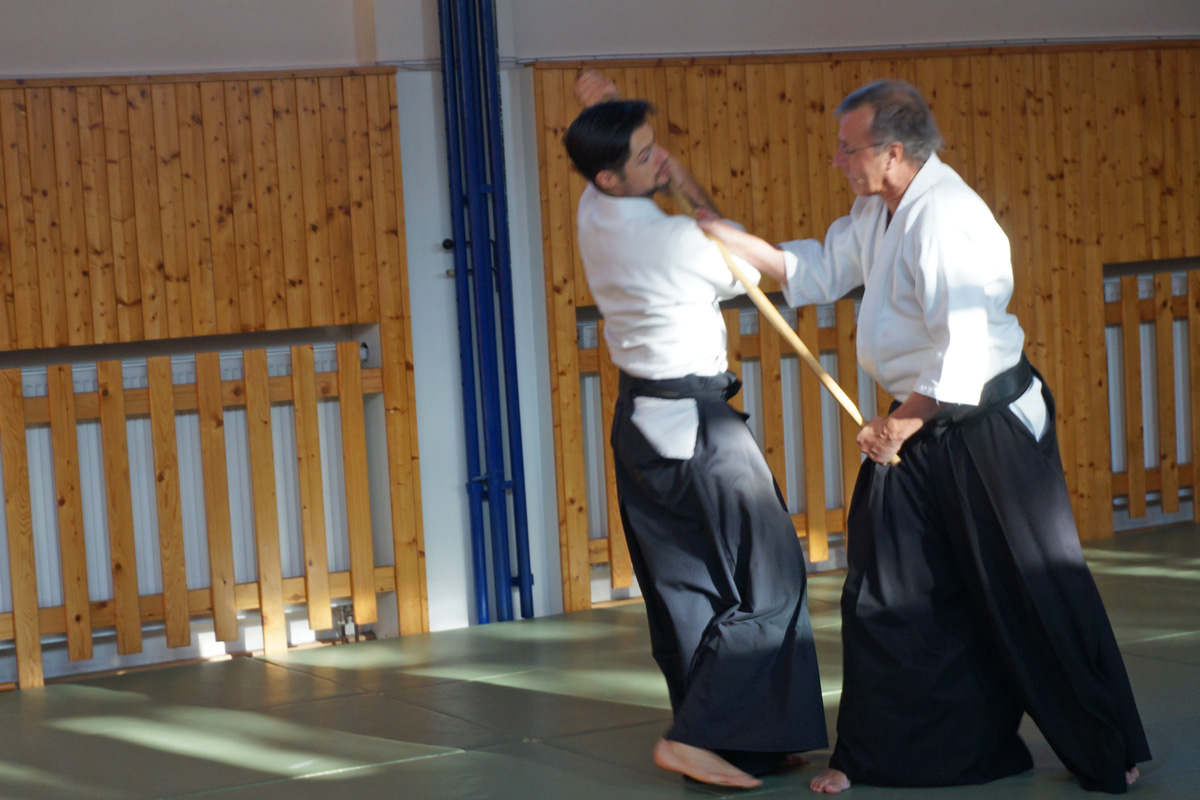 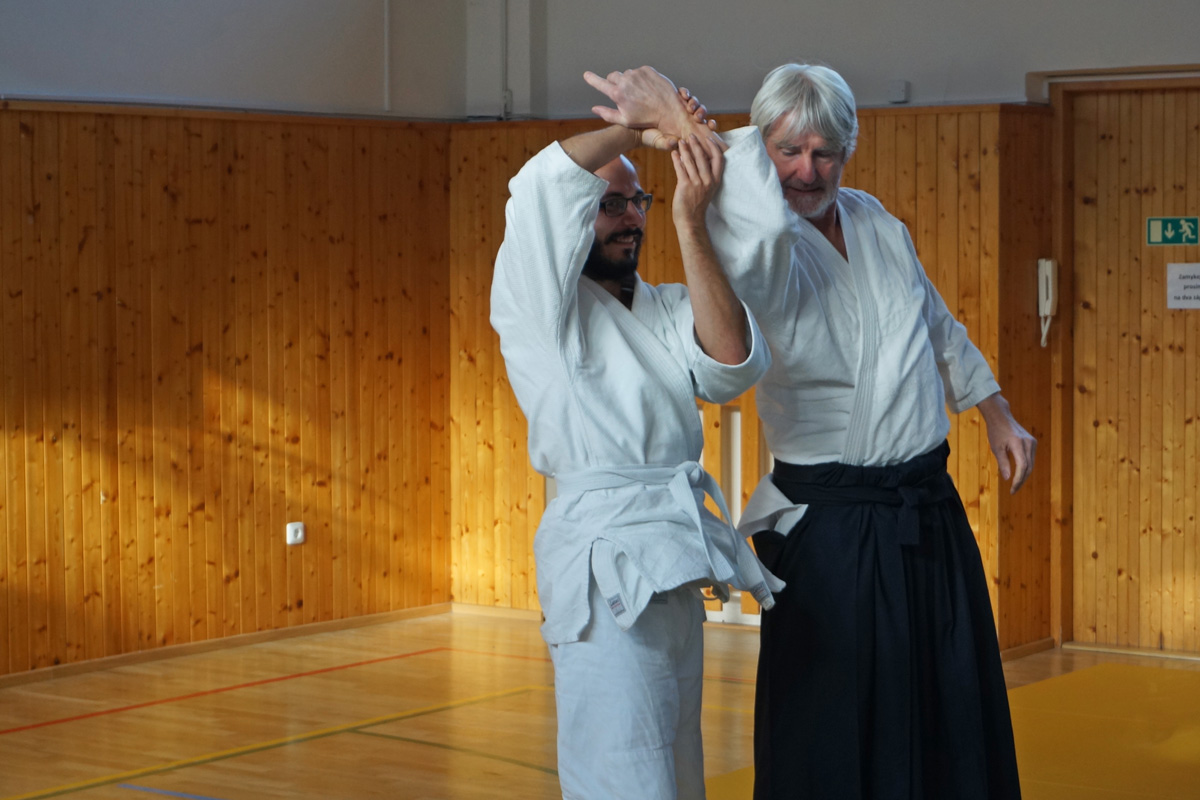 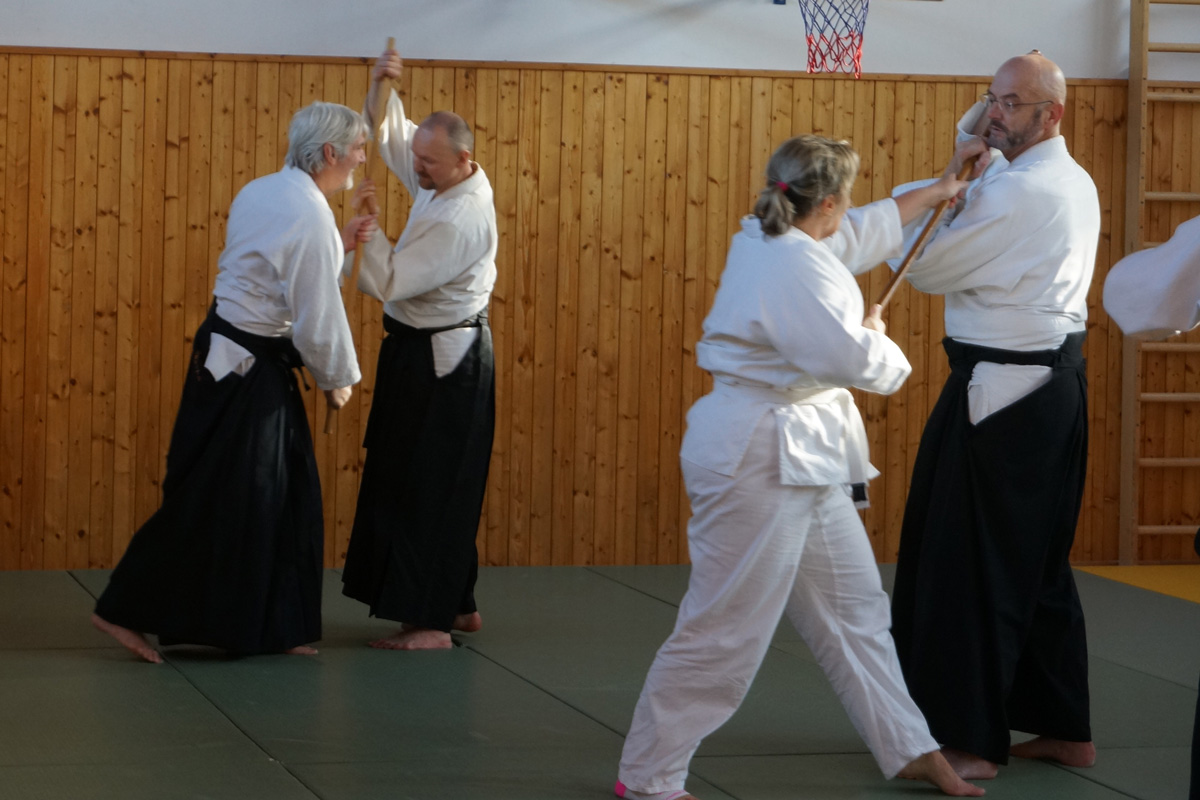