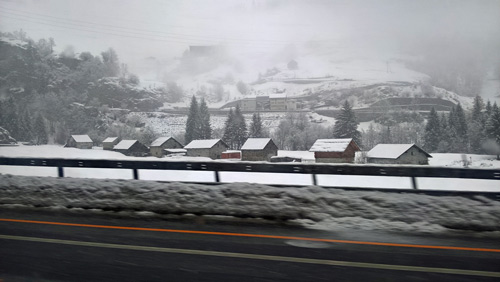 From November 22 to 24, 2019, the autumn seminar with Maurizio Volpe took place in Trebur (DE). Maurizio from Novara and Giuliano from Pavia, Italy, traveled with an environmentally friendly car. Shortly after the Swiss border they took Bernhard from Balerna on board. At the highest point of the route, in Airolo (1,175 m i.e. 3,855 ft), the snowfall was just changing to rain, but north of the Gotthard road tunnel the weather was sunny. Despite Friday afternoon, the trip to Trebur was calm and without big traffic jams.
At the destination, the Aikidoka of Trebur had already set up the mats perfectly in the gym of the Lindenschule and had prepared for all participants Jo, Bokken and Tanto. There were present Sven, the founder of Dojo Trebur from Antwerp, the photographer of the group photo from Bremen and Claudia and Christian from Nuremberg. 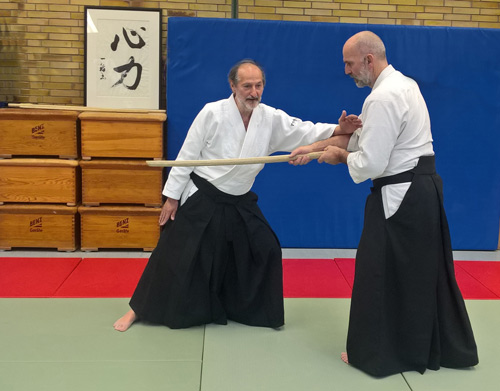 At the beginning of the lesson on Friday evening, Maurizio presented the SHODAN certificate to Dieter from Trebur, who had passed the exam last May. After Kenkotaiso and Aikitaiso, Maurizio did a series of Ki tests, partly with Jo and Bokken. At the end of the lesson he presented techniques for the attack ryokatadori in taninzugake. One form for irimi and another form for tenshin. During the taninzugake in the exam should be used about 70% irimi forms and 30% tenshin forms.
The evening finished as usual in the Croatian restaurant "Eigenheim". Some indulged in the local Hessian specialty: fresh cider.
The theme in the first part of Saturday morning was tsuzukiwaza 23 (bokkendori). Maurizio explained the settings and the executions very precisely and in detail. Although most of the participants knew this tsuzukiwaza already well, it was obvious that after good explanations, only subsequent practice with different partners would bring out the many subtleties and improve the execution.
In the second part, Bernhard let practice tsuzukiwaza 15 (ushiro ryokatadori), which is also included in the program of the 2nd dan. 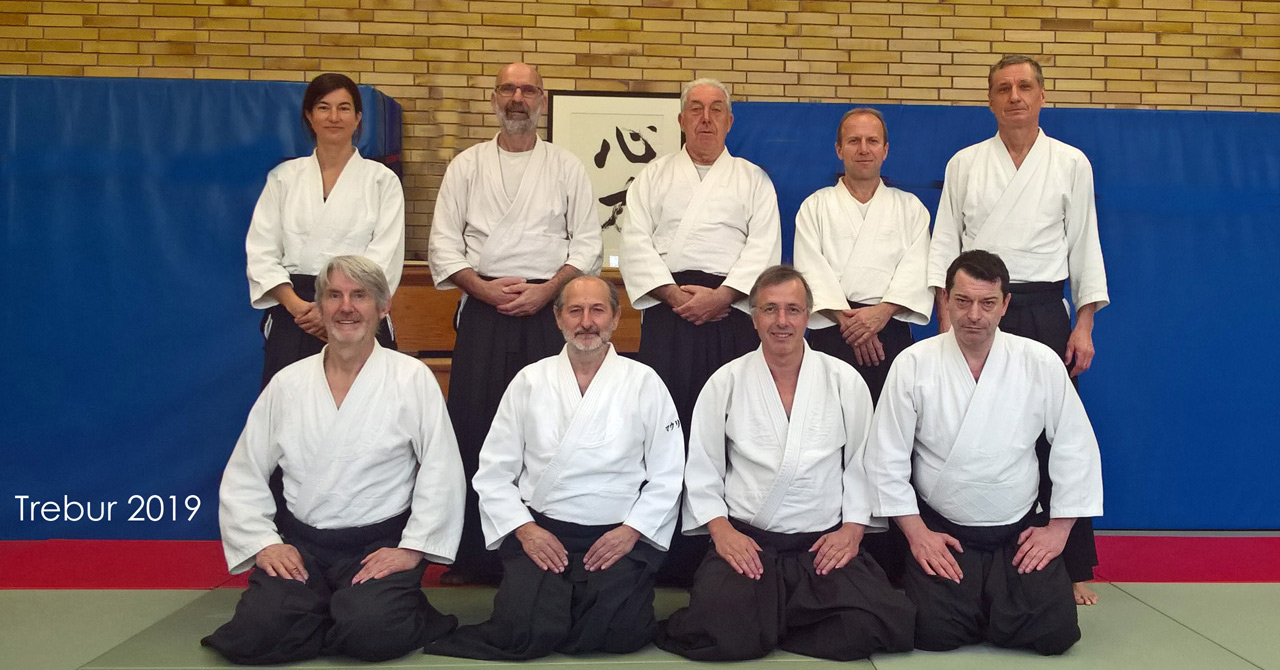 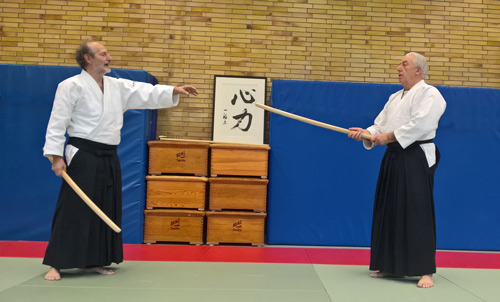 During the lunch break, there was a snack in the vestibule of the gym. The Aikidoka of Trebur had prepared various drinks, rolls, sausages, cheese, etc. In addition, the Italian participants added two bottles of the best Prosecco. The third bottle remained closed because most wanted to continue with a clear mind.
In the afternoon, Bernhard first completed the exercises of ryokatadori and then started with "Jo 2 and Bokken". In the meantime, a certain standard has developed here, which is also documented in videos (for example, here on toitsu.de). Often, however, the idea behind the movements and techniques is in need of explanation, as well as the number of stops that will demonstrate the various possibilities of interaction between Uke and Nage.
Maurizio taught the remaining techniques of Bokkendori in the second part of the afternoon training, so that in the end all the participants could demonstrate the entire tsuzukiwaza.
In the evening people met for a meal together at the Hotel Restaurant Zum Erker. 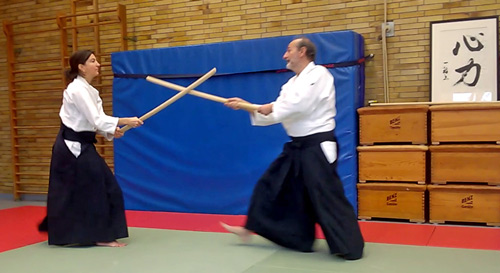 Well recovered we continued on Sunday morning with Maurizio. He taught tsuzukiwaza 28, commonly known as "Bokken 2 with partner". He himself likes to call it kumitachi 1, which, however, can lead to confusion with tsuzukiwaza 29 (kumitachi), which should then consistently be named kumitachi 2. In particular, the input sequence is very demanding. So it was very helpful that he explained exactly what happens there (shomenuchi and tsuki) and how it is done.
The second part was again Bernhard, who completed "Jo 2 and Bokken". Finally he showed again with Maurizio the most difficult passages, that is 3-4 in the first and the second form, as well as the end with 20-21-22. Here Maurizio proposed the variant to put the last tsuki on the left. In the end, all presented these tsuzukiwaza, partly in very good execution. It was obvious that both Nage and Uke must have understood the techniques well to be able to perform well. After the training, everyone helped to put away the mats. Then they strengthened themselves with a snack and the remaining Prosecco, before they left home.

Information about the Dojo Trebur can be found on the pages of the TSV 1886 Trebur: Aikido Trebur

Appendix: Structure of the Aikido certificate 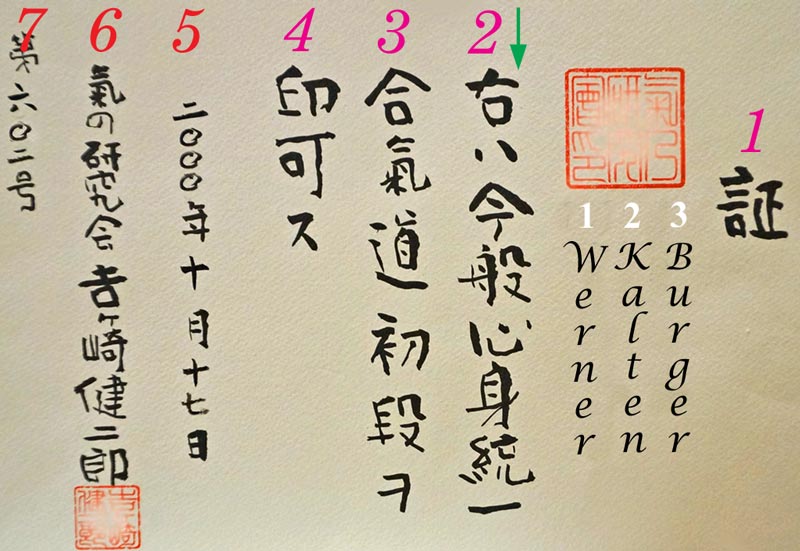 Since Dieter has a long surname, his certificate showed how Japanese and Western writings are combined. In the example the name, date and numbering have been changed.
The certificate is written in Kanji and Katakana from right to left and from top to bottom (red numbering).
1 証 (pronunciation: shō) means certificate
2 右ハ 今般 心身統 一 (migi wa konpan shinshintōitsu) right side now SHINSHINTOITSU
3 合氣道 初段 ヲ (aikidō shodan o) AIKIDO SHODAN
4 印可ス (inkasu) is permitted
5 Date of exam
6 Issuer
7 Number
The western name "Werner Kaltenburger" is also written vertically, but is read from left to right!
Free translation: The named person on the right receives the SHIN SHIN TOITSU AIKIDO SHODAN.