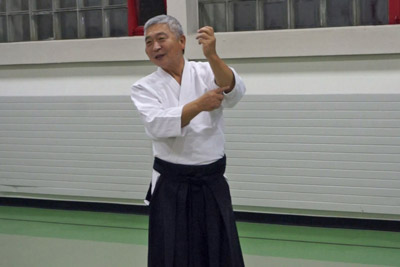 From October 18 to 20, 2019, the annual aikido seminar with Doshu Yoshigasaki took place in Balerna (CH). On Friday evening there were already about 40 Aikidoka on the mat, mainly from Balerna and Dojos from nearby Italy. During the weekend, there were a total of 60 participants. Yoshigasaki Sensei took the Aikitaiso as the main theme of the evening, also with regard to the upcoming Dan examinations for the following day.
Through the Ki-tests of the exercises in Aikitaiso, he came again and again to elementary movements of self-defense, which can be used according to the peaceful principles of Aikido in real situations. Normal aikido training develops the physical and mental skills that can then be used when needed. Thus, aikido remains a path (Japanese: DO) for personal development - physical and mental, as well as philosophical - and offers the opportunity to use the acquired self-defense skills, which is an important practical aspect for many aikidoka. After the training, there was a dinner in the sports hall, sponsored by Aikido Balerna. There were delicious Vietnamese dishes.

Photos of the seminar 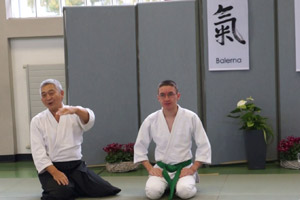 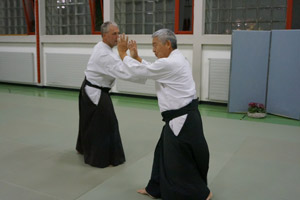 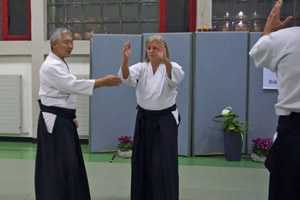 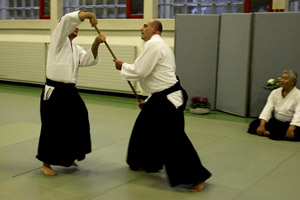 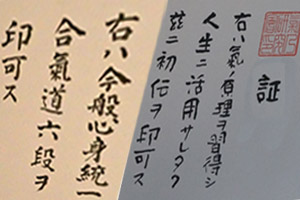 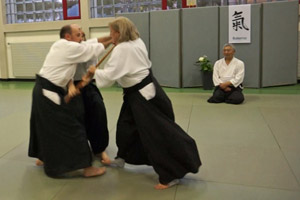 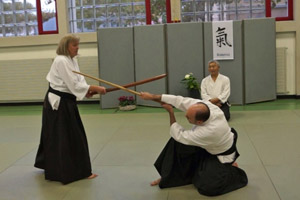 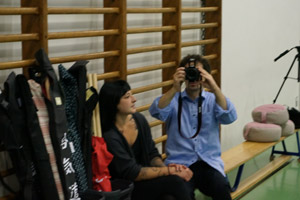 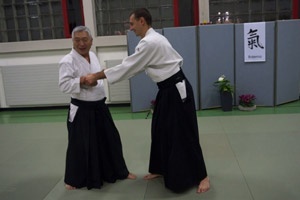 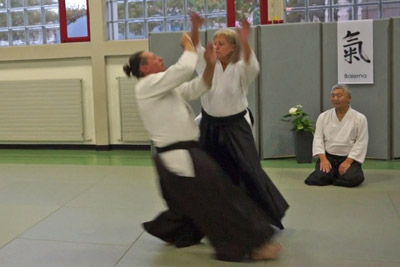 In this seminar four Aikidoka of the Dojo Balerna received graduation certificates from the hands of the Doshu:
Alessio Negro SHODEN, Michele Cassina SHODEN, Govert Erkelens 2nd DAN and Bernhard Boll 6th DAN.
On Saturday, Doshu Yoshigasaki taught mainly techniques from the 4th Dan program. He explainde the complete Hitoriwaza, the two demanding tsuzukiwaza with sword, Kumitachi and Shinken, and the techniques of Jonage with one attacker. The advanced students were able to refine their understanding and their movements, for the kyu grades it were interesting exercises and first steps in the interaction with the aikido-partner via sword. At the conclusion of the training, the Doshu took two dan examinations. Yvette Voumard from Balerna successfully passed her exam for 4th DAN, as did Giuseppe de Matteo from Italy. 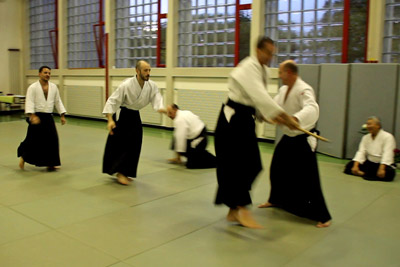 The 4th Dan exam is the final technical exam in Ki Aikido of Ki no Kenkyukai International and means that all standard techniques are now well known and mastered. From this on, the Aikidoka will go his own way, on his own responsibility.
As Uke acted kindly Moreno Maule from Novara, Francesco Ingemi, Matteo Grimaldi and Samuele Leonardi from Vercelli, Corrado Calossi from Bologna and Govert Erkelens from Balerna. After the exams, the Doshu talked about how the different personality types show up in the exams. Aikido is not least an art of expressing yourself.
In the evening, many participants dined together at Ul Furmighin in Sagno, where Anna again had prepared a very delicious dinner. The foreign participants, as well as the Doshu, spend the night on the occasion of the seminars in Balerna regularly at Ul Furmighin.

In the instructors' lesson on Sunday morning, the Doshu explained again the correct counting in Hitoriwaza. Afterwards in the lesson for all Aikidoka he talked about the history of Aikido. It all began with Takeda Sokaku (1859-1943), a former samurai who taught his Daito-Ryu-Aiki Jujutsu to individual students throughout Japan. These were unarmed self-defense techniques derived from movements with the sword. The basic concept are cutting movements and the use of your arms as in sword fighting: both hands at a fixed distance from each other. Ueshiba Morihei (1883-1969), the founder of Aikido, was a student of Takeda and initially taught this Aiki Jujutsu too. Over time, Ueshiba Morihei developed his teaching more and more in the spiritual direction, until he called his art, around about 1941, Aikido. The technical concept consisted of triangle, circle and square. The triangle symbolizes the collision-free dodge, the circle means to lead the attacker around in a circle, and the square symbolizes the compact and stable conclusion, where the attacker falls or is fixed to the ground. 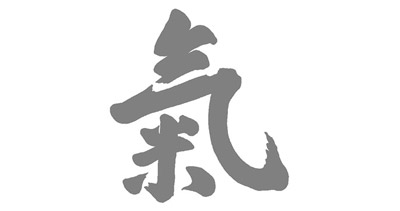 Tohei Koichi (1920-2011) was an outstanding student of Ueshiba Morihei and chief instructor of the aikido organization in Tokyo. He developed his own teaching system to systematically teach the Ki in Aikido. He used a set of rules - the famous 5 principles and some more - to teach how to coordinate mind and body. Typical for his interpretation of the techniques was guiding the attacker by specifying the direction of the movement using the fingers of the leading hand, this means he used the concept of vectors. Tohei also took advantage of the stability of gyaku hanmi. This posture Ueshiba Morihei had not yet taught, because he was very strong in his hanmi posture which he had used in his work in felling trees. Tohei also discovered the effect of the change from external to internal perception. This can be used e.g. to make an attacker change his intentions. The agressor can let go of the attack. To settle conflict situations peacefully is only possible by changing the original aggressive intentions (maybe also that of the "defender").

Doshu Yoshigasaki (born 1950) studied Ki Akido with Tohei Sensei. In his lessons and in his books, he develops both the techniques of Aikido and the underlying theory. The physical stability results from lines and instead of the so-called point-mathematics, which is well suited for matter, materials and machines, he propagates the forms-mathematics in Aikido. This is the more appropriate for living things. He also studies how the skills developed in aikido can be used for acts of self-protection in reality. Because the aikido, as practiced in the dojo, can not be transferred one to one to real self-defense situations. The right to self-defense does not allow anyone to throw people on the street or hold them captive. In addition, the nature of the threats in reality is much more diverse and not standardized as in the dojo.
In this way, the original idea of self-defense of Daito-Ryu-Aiki-Jujutsu by Takeda is not lost. Ueshiba Morihei's interpretation of Aikido as a way (DO) for personal development - on a physical and mental level, as well as philosophical, is practiced via aikido techniques in the Dojo. Outside the dojo, it is possible to protect oneself in conflict situations of real life and to behave peacefully, building on the aikido practiced on the mat.