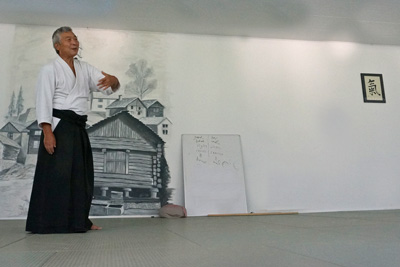 From August 24 to 31, 2019, the annual summer seminar "Aikido and Misogi" with Doshu Yoshigasaki took place in Bosco Gurin (CH). The Aikidoka stay in shared rooms in the mountain school home of Balerna. Practise takes place in rented rooms in the Ostello Giovani Bosco, a kind of youth hostel that is intensively used in winter by skiing people. Bosco Gurin is a well-known winter sports resort in Ticino.
Misogi takes place in the Dojo from 6:15 am to 7:00 am. The time is chosen so that even those who did not wake up in time, still have a chance to get up. At 6:00 in the morning, the bells of the village church are ringing so loudly that you usually wake up. Breakfast is served after Misogi and the Aikido lesson starts at 8:30, until 12:00. It's all "instructor lessons". The course is only for teachers and dan. As an exception, however, a few dedicated Aikidoka from Balerna, the organizing Dojo, can participate. The afternoon is at leisure. In good weather, some go for mountain hiking or swimming. Others use the time to repeat and deepen the teachings of the morning lessons or to prepare for exams. 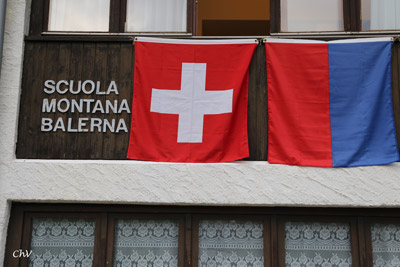 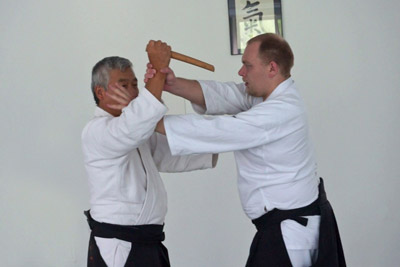 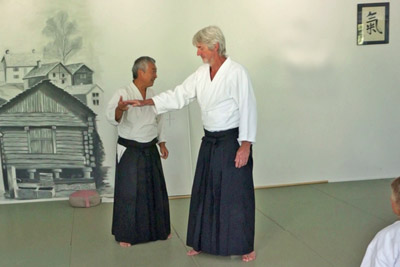 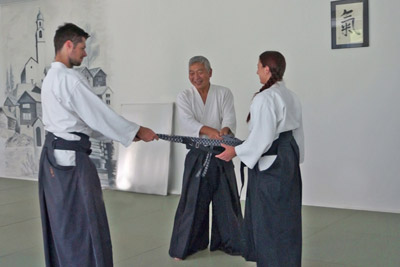 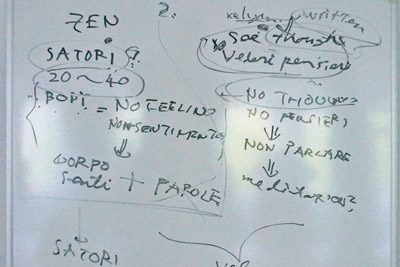 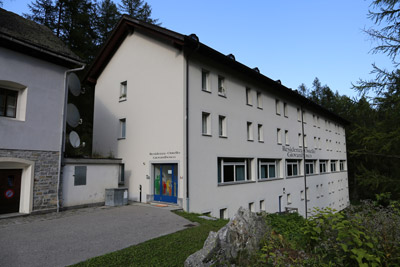 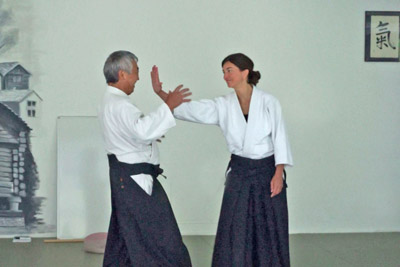 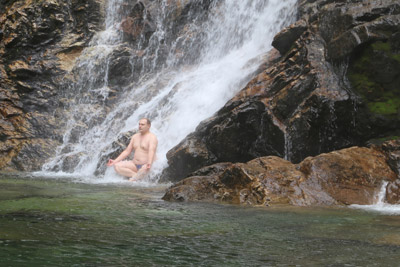 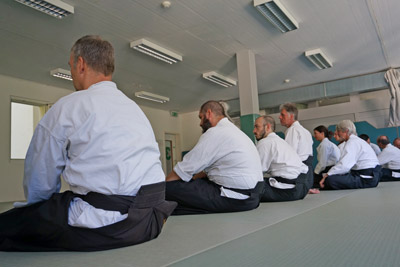 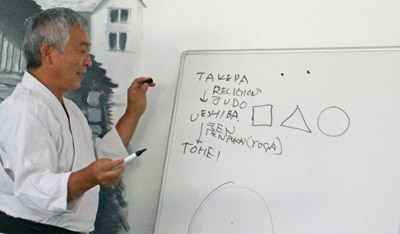 In the Aikido lesson, Doshu Yoshigasaki began with telling us his perspective on the history of aikido. The techniques themselves are from the Daito-Ryu-Aiki-Jujutsu of Takeda Sokaku (1859-1943), a former samurai. The weaponless techniques are derived from the movements with the sword. Therefore, there are cutting movements and the use of the arms as in sword fighting: both hands are at a fixed distance from each other. Ueshiba Morihei (1883-1969), the founder of Aikido, learned from Takeda and initially taught this Aiki-Jujutsu. His technical concept consisted of triangle, circle and square. The triangle symbolizes the collision-free dodge, the circle means to lead the attacker in a circle, and the square symbolizes the compact and stable conclusion, where the attacker falls or is fixed to the ground. Tohei Koichi (1920-2011) developed his own teaching system. For this he used his famous 5 principles (and many more). Typical of his interpretation of the techniques was guiding the attacker by specifying the direction using the fingers of the leading hand, i.e. he used the concept of vectors. Furthermore Tohei discovered the effect of changing from external to internal perception. He was able to change the "spirit of the attacker". In this way he could cause the attacker to change his intentions. 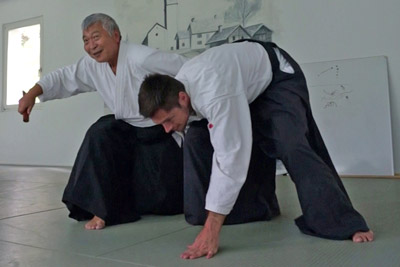 The technical program of the week consisted of two main topics. On the one hand, the elementary acts based on principles of aikido that serve for self-protection in the real world. On the other hand, we practiced techniques for the 2nd Dan, such as Ushirodori, Tanto 2, Bokken 2 with partner, Jo 2 with Bokken, Bokkendori etc. Everything was studied in terms of the "mathematics of forms". The usual "mathematics of points" is adapted only for material and machinery. The concepts "change of form" and "change of position" also played an important role. These terms are helpful in understanding the aikido techniques we want to do. The theoretical basics are important for aikido teachers, who thus have a basis for teaching and can further develop aikido. Yoshigasaki also repeatedly compared the usual Western thinking with the traditional Japanese view of the world. This is helpful for us Europeans at least in the sense that we can better recognize our partially unconscious points of view. 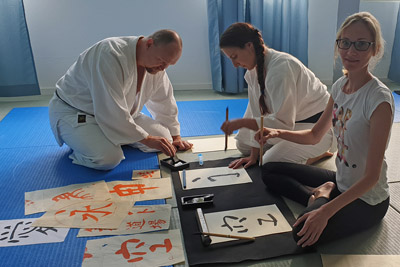 The free afternoons were used in quite different ways by the participants. Part of them was introduced by Michal Hájek to the art of Japanese calligraphy SHODO. Michal had brought all the equipment with him: brushes, ink stones, special paper and templates for the writing exercises. On the edge of the tatami he showed to the interested people how to make ink, how to properly lay out and fix the paper and how to guide the brush correctly. The meaning of the characters, kanji or hiragana, was less important here, the transfer of personal expression to paper was practiced. From Moscow, Anna had arrived with her brother Maxim, who attended the aikido seminar. She is an artist in design and painting. With her easel she moved outside and painted some views of Bosco Gurin. On Anna's website you get a very interesting impression of the dimensions of her work. annabo.ru.

Excursion to the valley of Verzasca 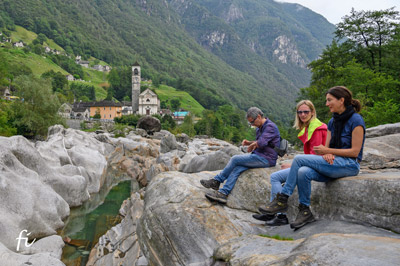 Usually on Wednesday there is no Aikido lesson, to give especially the participants from abroad the opportunity to see a bit more of Switzerland. They can take part in a trip in the area. This year the destination was the valley of the Verzasca, as it was already in the year 2007. To get there you have to make way down from Bosco Gurin through the Vallemaggia, leave it at Locarno and then turn in Gordola in the parallel Verzasca valley. The day was rainy at first, but the weather improved on arrival in Sonogno. There is a beautiful waterfall "La Froda". After having visited La Froda - some bathed in cold water, one even sat down under the falling water - we dined excellently in the Grotto Efra. Afterwards we went back to Lavertezzo with the famous bridge with the bare rocks and the turquoise water. Two years ago, in 2017, a Youtuber from Milan, Italy, published a short video about the scene at Ponte Lavertezzo, describing the Verzasca Valley as "the Maldives of Milan". As a result, many tourists from Lombardy poured into the valley and practically blocked the streets. To counter this overriding rush, a parking ticket for the whole valley was introduced. It costs only 10 Swiss francs and is valid for one day. So you can visit the whole valley for a day and park on the marked parking lots. In the evening there was a delicious dinner in Bosco Gurin, prepared by Yvette with helpers. One reason for the day off is that the cook and the facility management have at least one day off per week. 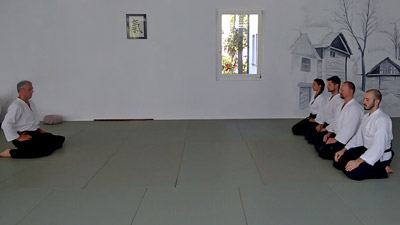 On Friday just before noon the Doshu took the scheduled exams. In his special way he had previously unsettled the candidates. "Now there are still 40 minutes left to withdraw from the exam". Apparently, that was a test of whether they really felt ready. Christian Veith from the "Ki Aikido Metropolitan Region Nuernberg" passed his OKUDEN exam without difficulty and Govert Erkelens from Dojo Balerna successfully passed his exam for the 2nd DAN. Govert got a good sweat as the exam lasted more than 18 minutes. Bosco Gurin is located at 1500 m above sea level, which seems to have a slight effect. As Uke served Michal Hájek from Prague, Ryan Jepson and Manja Bozic from Vienna and Matteo Grimaldi from Vercelli. Even the pillars in the dojo did not prevent Govert from a beautiful Randori, where Matteo as Uke demonstrated again his skills of falling in a big manner. 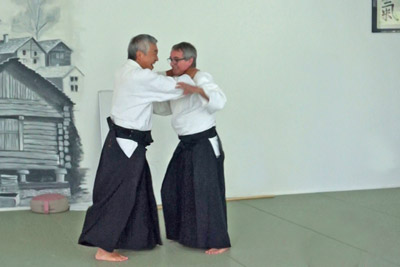 On Saturday, Sensei Yoshigasaki repeated the hitoriwaza. He showed how well applicable these exercises can be. He developed elementary movements from the hitoriwaza exercises, so-called acts, which are useful for the self-protection in real life. This is a very interesting area. In my opinion, it is important that the physical part of aikido is not just an art on the mats in the dojo. With the basics of Aikido you can develop an effective self-defense. Due to the aikido principles this will not be aggressive. Techniques are, according to Doshu, "fixed movements within a given framework for a particular purpose". The problem here is, that the very will to necessarily achieve the purpose leads to aggression. Techniques are therefore inherently aggressive. With the concept of acts, one can learn a free acting. According to the Aikido principles, this is not aggressive. In addition, the acts are infinitely variable and always adaptable to the real situation.

At the end of the lesson, all participants helped to take the mats away. And after lunch all aikidoka dispersed in many directions. We look forward to seeing you again next year. A summary video can be found at Aikido Balerna: to the video .